At Fulford Heath we believe that everyone can improve their golf and we can help every golfer get maximum enjoyment out of the game!

Our Professional staff strive to get the best out of you, as an individual, whether you are an elite amateur, total beginner or professional. We tailor our teaching methods, delivery styles and lesson structures to help you reach your true potential. 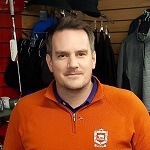 Richard Davies - PGA Golf Professional
After taking up golf at the tender age of 6, my passion for the game has never dwindled.

I have played at many excellent levels of golf throughout my life, Including some notable amateur achievements of County U16 captain, County U18 Captain, England U18 Squad, U18 County Strokeplay Champion 2 years running, right through to representing the County 1st team for two seasons during my amateur career before turning professional at the age of 18.

Throughout my professional career I have won numerous individual and Pro-Am events within the Worcestershire PGA, and Midland PGA region, not to mention finishing 18th in the PGA Assistants National Finals. I have also competed on various tours including the Euro Pro Tour and attended European Tour School.

I have held two course records with 63 at Bewdley Pines GC, 65 at Coptheath GC & 60 in an unofficial competition at the Aylesford GC.

I worked for over ten years at Kings Norton GC under Professional Kevin Hayward as an Assistant and then self employed teaching Professional, before moving to Vienna at Colony GC in a purely teaching role taking the club scratch team to the national finals.

As you can see, I have lead a lifetime of golf at all levels from Amateur right through to Professional golf and my passion for improvement remains just as strong.

Don't miss updates from us.

Thank you for signing up.

One last step - You will receive an email from us in the next few minutes. Please click the link to confirm you are happy to receive our weekly newsletter.